Franco-American history dates all the way back to the founding of the Thirteen Colonies. Samuel de Champlain, founder of Quebec in 1608, is even credited with drafting the first accurate map of New England when he published his early 17th-Century Voyages in 1613.

These resources should help tell the story of how French language and culture planted roots in New England. We're talking centuries of key historical figures, mass migrations, and the ongoing efforts to preserve French New England to this very day.

The Industrial Revolution was a paradigm shift for Canadians and Americans alike, especially in the Northeast. From the late 19th Century to the mid 20th Century, French Canadians from Quebec and the Maritimes poured into New England looking for work. It was the biggest influx of French to the US Northeast since the Huguenots landed in North America some 300 years prior.

(image courtesy of the Library of Congress)

This lesson plan from the Library of Congress is a fantastic way to immerse your students with firsthand accounts of French Canadian immigrants in New England in the 1930s. The lesson lasts 2 weeks and is suitable for grades 6-8. Using a variety of fascinating primary sources, your students will investigate how and why French Canadian immigrants settled in New England, and what the kind of cultural impact they had on the region.

2. Radio: Past, Present and Future

Looking to throw some radio docs into your lesson plans? We found two programs. In 2018, VPR's 'Brave Little State' produced What's The History Of French Canadian Immigration Into Vermont?, a great little doc with local firsthand accounts of how French made its way into Vermont. 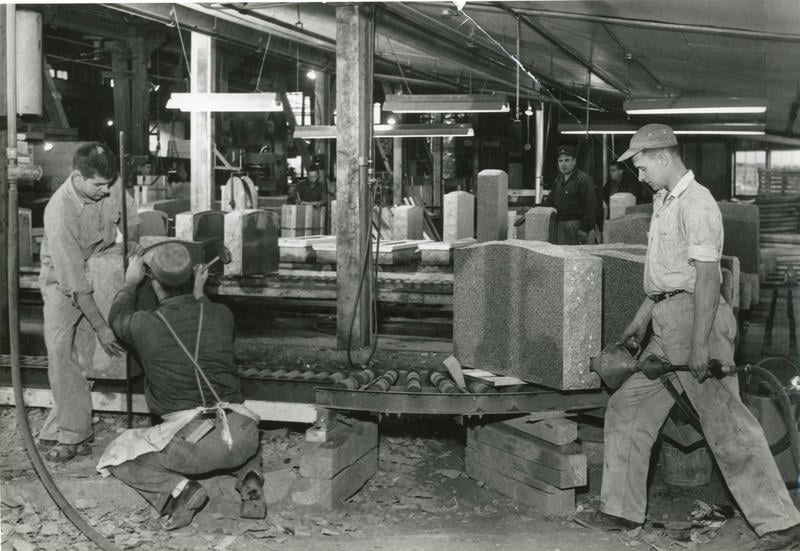 Speaking of VPR, we found another great segment about the future of French on Maine Public Radio's All Things Considered. This one is about how French is resurgent in Lewiston, ME, thanks to Francophone African immigrants. It's a great segment that touches on the past, present and future of French in New England.

We also found a regular show out of New Hampshire - WFEA's 'Chez-nous' with Roger Lacerte. This three-hour show is a portrait of how French is surviving in present-day New England. Lacerte plays French music like Québécois country, Acadian folk and international pop. WFEA is a real gem, broadcasting to Merrimack's French community since 1937.

Student Handouts is a solid resource for free, printable activities and lesson plans pertaining to a wide range of subjects. This particular resource is a reading on the history of the Franco-American alliance that emerged in the aftermath of the American Revolution. Suitable for grades 9-12, this free resource includes the reading material and four comprehension-testing questions (along with the answer key). Enjoy!

(image courtesy of the Government of Canada)

4. French Canadian Immigration to the US: Letter-writing & Role-Playing Lesson Plan

The Yale New-Haven Teachers Institute has a great lesson plan designed to help students develop a sense of the larger world around them, and how it's been shaped by others through history.

(image courtesy of the University of Southern Maine)

The unit examines the geography of French-speaking North America and the immigrant families who brought French language and culture to the United States—especially via New France and, later, Canada. Themes range from the Acadian Expulsion in 1755, which accounts for much of the French in Louisiana, to the mass immigration during the Industrial Revolution to New England. Students will put themselves in the shoes of early French Canadian immigrants and practice their French through letter-writing and role-play activities. It's really quite comprehensive and hands-on—the perfect lesson plan to get your students applying their French.

5. Spoiled for Choice: The Franco-American Collection

(image courtesy of the University of Southern Maine)

The University of Southern Maine has an incredible collection of sources and resources that dive deep into Franco-American culture in New England, with tens of thousands of printed books, photographs, newspaper clippings and audio-visual recordings to help fuel your French curriculum. Here are our favourites: