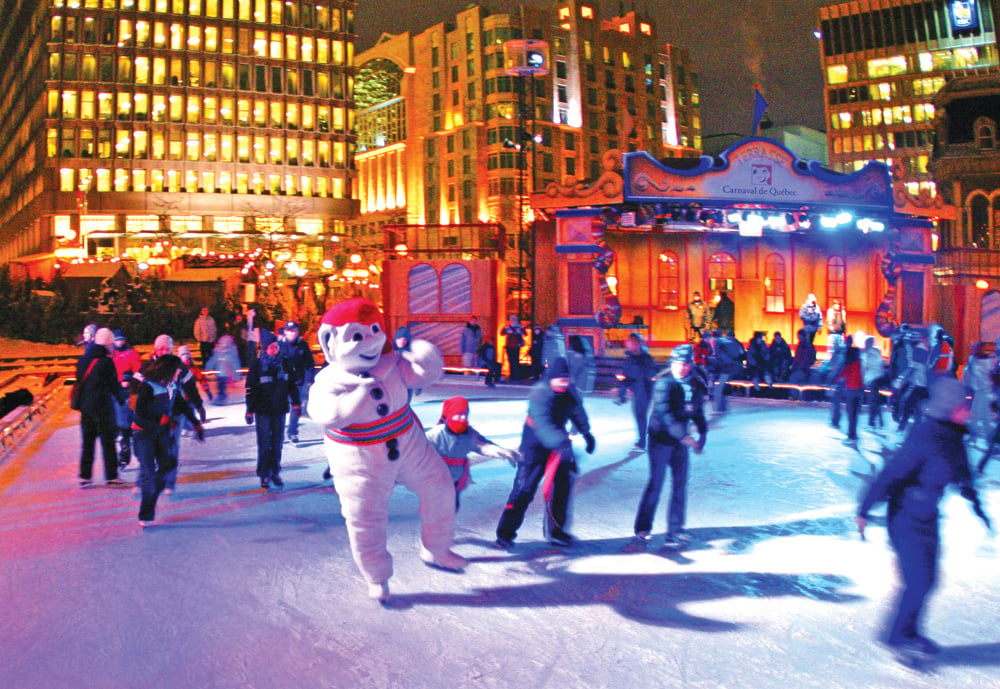 Le Carnaval de Québec is one of our top student group travel destinations and events! Hosted in one of Canada’s most charming cities and UNESCO World Heritage Sites nonetheless, Québec City is the perfect fairy-tale location for anyone studying French or wanting to get out of their comfort zone on a winter student trip. And if you’re thinking about how cold it’ll be, think again! You’ll be moving around and layering up so much, you’ll never even be feeling the cold at Carnival.

Here’s a taste of what makes the annual Québec City Winter Carnival so cool (pun intended)!

But First, the History of Carnaval de Québec

The tradition of having a mid-winter celebration in Québec can be traced back to the history of colonial New France (1534-1763), when family and friends would gather in January to mid-February to break the boredom and deep freeze of winter. In classic French-Canadian tradition, the settlers of New-France would celebrate with a massive feast, live music, foot tapping and gigues (traditional French-Canadian dances). This annual celebration in the deepest and darkest of the winter months would eventually lead to Québec’s first large-scale snow festival in 1894.

Interrupted through the years by both World Wars and the Great Depression, the festivities resurfaced sporadically until 1954, when a group of businessmen from Québec decided to revive and modernize the Québec Winter Carnival to attract visitors and help promote the economic development of the region. The rest, as we say, is history! 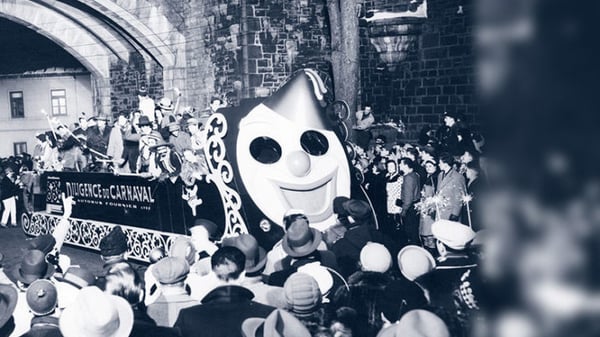 It was during the first ‘’modern’’ edition of the Carnival in 1955, that Bonhomme Carnaval, the official mascot and ambassador of the festivities, was first introduced to the public.

Bonhomme, short for bonhomme de neige (snowman) is quite hard to miss! Dressed of only a red tuque (beanie), black buttons and a ceinture fléchée (arrowhead sash), if it’s not his impressive size that catches your eye (seven-foot-tall and four-hundred-pounds, to be exact), it’s his incredible personality that incarnates ‘’la joie de vie’’ (love of life), a motto that is near and dear to Quebecers. He is such a celebrity, that every mayor of Québec City since 1955 has handed him a key to the city during the opening ceremonies of the Carnival.

Making regular appearances all through Carnival, your best chances to see him are on the final float of the Saturday evening parades, or in his house, the Ice Palace. If you’re lucky, you might even stumble upon him practicing his signature high kicks move or singing his signature song ‘’Salut Bonhomme’’! 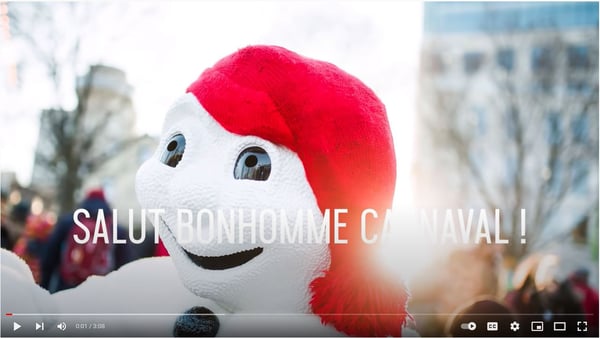 For full access to the Carnival sites, you will need to purchase the official effigie du Carnaval (effigy), a pendant that you attach to your coat or backpack, that goes for about $15 CAD. The effigy, just like the Ice Palace, changes its design annually but one thing remains, Bonhomme Carnaval’s lovely white face and red tuque appear on every single model since its first edition in 1955.

Fun fact, famous Québécois wood carver, Alphonse Paré, whose artwork is featured at the Vatican Museum, created all 15 first editions of the Carnival effigies. These effigies, which are now considered collectibles, and every other version since 1955, are displayed at the Atelier Paré Woodcarving Museum in Sainte-Anne-de-Beaupré. You can go visit the museum located in Alphonse Paré’s former workshop, just 5 minutes away from the Sainte-Anne-de-Beaupré Basilica on Québec’s magnificent Beaupré Coast. 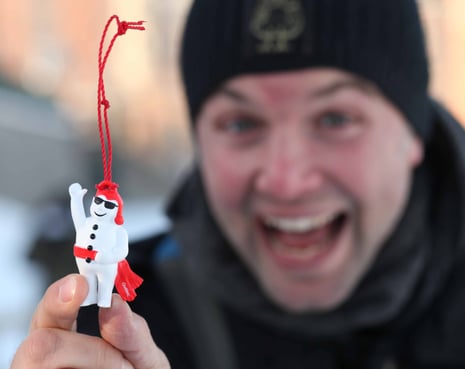 3. Memorabilia: The Arrowhead Sash and Trumpet

No memorabilia, other than the effigies, are quite as popular as the arrow sash and the Carnival trumpet. You’ll see and hear them all through the Old Walled City, before, during, and after Carnival.

The arrowhead sashes were traditionally used by the coureurs des bois (translates to the "runners of the woods"), independent entrepreneurial French-Canadian traders who would travel solo through North America to trade European items for animal furs with First Nations. The arrow sash was attached around the waist to hold furs, food, and other items inside the traders’ coats, while preventing the cold from penetrating inside. It was also used as a tumpline, an emergency rope, a key holder, and as a mark of distinction and origin. Historic fur trade companies, such as the Hudson’s Bay Company and the North West Company were known to have branded their sashes respectively red and blue, while the Métis were the first to mix the colours together to make their own distinctive sashes.

It is largely because of the Carnaval de Québec and the Festival du Voyageur in Winnipeg, which celebrates the history of fur trade, Métis culture and the French language, that the arrowhead sash can still be seen in French-Canadian and Métis culture today.

As for the hard-to-miss trumpets, they are long, they are red or blue, and they can produce up to 114 decibels! You’ll hear them along rue Saint-Jean, Grande-Allée, during the parades… and basically at any celebration Quebec has other than the Carnival. They’re just great at getting a crowd going, what can we say!

If you’re looking for an authentic Carnival experience that’s a little more fast paced and intense, then look no further! The annual ice canoe race is everything you should expect from an extreme winter sport. It’s epic and you won’t want to miss it!

The race holds its origins from First Nations and settlers of New-France who would make canoes out of birch bark to transport living essentials, like food and medicine, across the river during the winter months. Although the St-Lawrence River freezes at the tip of Quebec City and can create a natural ice bridge (Québec’s name originates from the Algonquin word Kébec, meaning ‘’where the river narrows’’), most areas along the mighty St-Lawrence River are unattainable without a canoe. Nowadays, with modern technology for transportation and communication between shores, all that remains is a highly entertaining sport for Carnaval goers to attend!

The race consists of forty teams battling it out in three categories: competition - men, competition - women, and general participation, where teams use large dimension canoes to cross from Québec City to Lévis (approximately 3.2 km). Because the event takes place in the middle of the St-Lawrence river, conditions can vary a lot! On perfect condition days, races can last as little as 23 minutes. On windy and snowy days, where wild icebergs start rolling in, it can take much longer with participants having to pull their canoes on the icebergs and avoiding being carried away by the current.

Presented every year since 1955, the Ice Canoe Race is the activity that attracts the biggest crowds throughout Carnival. The location of the race, right at the bottom of Cap Diamant, the highest point of the city, allows for spectators to watch from every angle. Visitors usually check the race out from atop Terrasse Dufferin, from the windows of their hotel room at the Château Frontenac, or from the riverside right next to Le Petit Champlain and Place Royale. The race typically falls on every second Saturday of the Carnival, so check the schedule if you plan on catching the race during your student trip! 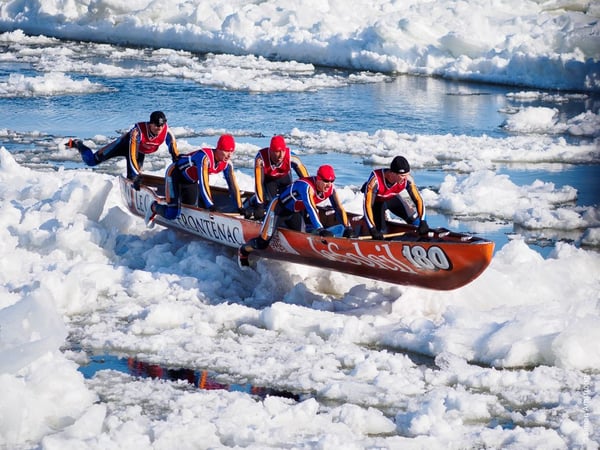 Other classic Carnival activities include visiting Bonhomme Carnaval’s home, the Ice Palace! Located across the street from the Québec Parliament Building, it is where the opening ceremonies are held. Built out of 2000 blocks of ice that weigh around 300 pounds, the design of the castle changes every edition. In past years, the Palace has included a spa area, Bonhomme’s office, a reception room, a museum room with artifacts from previous editions, a children’s playroom, a gym…. And all of that, in the shape of a snowflake. Talk about craftsmanship!

The Winter Carnival stretches out over 17 days and features a night parade every Saturday night. The parade itself passes by in about 30 minutes, featuring an array of floats with singers, jugglers, and marching bands, before closing out with Bonhomme himself. The floats usually highlight Québec wildlife, music, and culture. It’s a must for any Carnival itinerary, so bundle up, find a good spot, and get ready to dance the winter cold away!

Your effigy also includes access to all other Carnival sites spread across Old Québec, the Plains of Abraham and along Grande-Allée, where you can participate in lumberjack games, try out some ice slides, view snow sculpture artists at work, and so on. 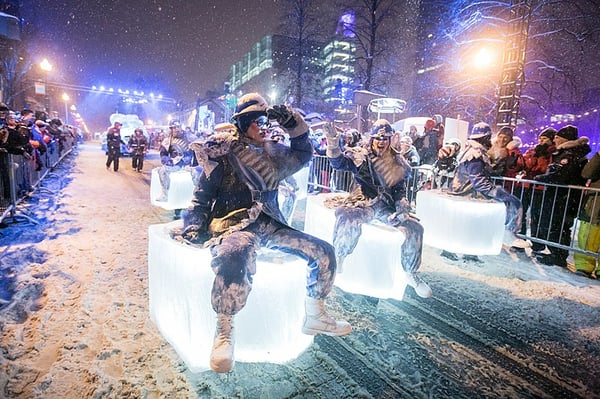 The 69th edition of Carnaval de Québec will take place in January to February. The official dates for 2023 have yet to be confirmed, but you can still get started and begin planning today!